The Long Road to a Democratic Transition in Guatemala

Could Guatemala be on the verge of a long delayed transition to democracy? Could the seeds of democracy sown in a peace process that happened before most Guatemalans living today were even born finally be given the chance to sprout? Admittedly, it’s a stretch. 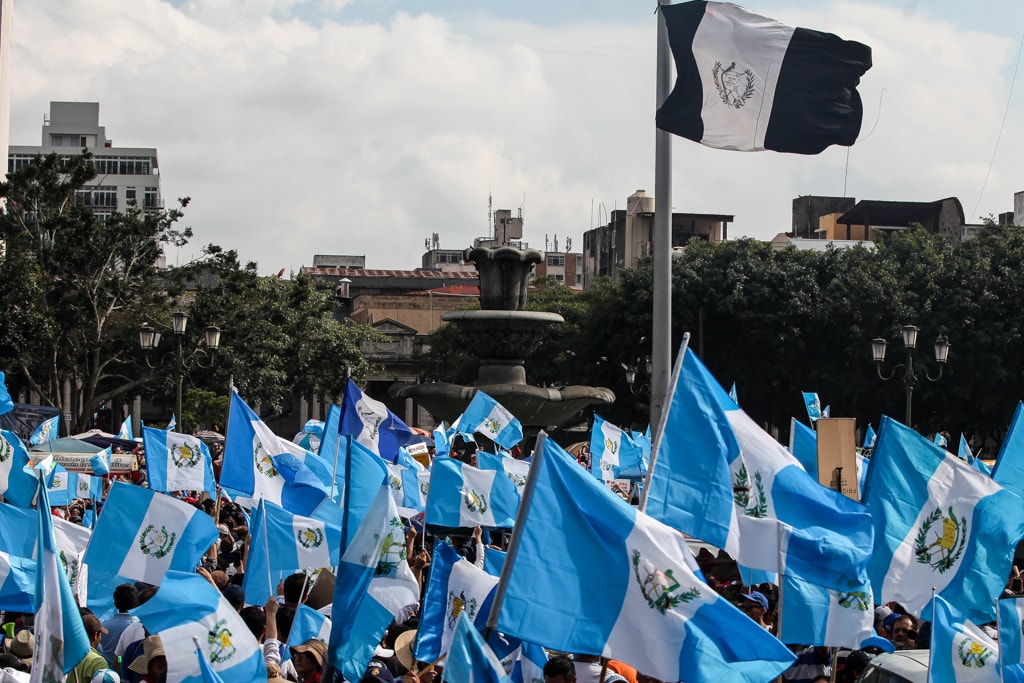 The odds are no better than even, worse perhaps. But it’s not beyond the realm of possibility or at least imagination. Conditions could be emerging that make a transition  worth fighting for and there for the seizing.

History hasn’t been on democracy’s side in Guatemala. Guatemalans have ever only enjoyed a fleeting glimpse of it, most vividly during its decade of democratic spring. We all know how that effort ended. The Arbenz regime was brutally toppled by an alliance of threatened, terrified and determined actors who couldn’t countenance the reforms the regime pledged. The United States, Guatemala’s oligarchy and military joined forces to rout the regime and eliminate any chance of democracy for more than four decades.

Then some 21 years ago, Guatemalans signed a formal peace treaty that moved the goalposts forward. Those who came to the negotiating table truly committed to democracy understood that far-reaching reforms were needed for it to take shape. They hammered out a comprehensive treaty, twinning peace with democratic governance. Each individual agreement contained an element of an aspirational democracy: respect for human rights, some degree of accountability, modest social and economic reform, respect for indigenous rights and identity, and the subordination of an often rogue military to civilian authority.

There were some things that those negotiating in good faith were either too weak to achieve or failed to understand the need to enshrine in the accords. They had to leave aside the constitutional reforms that would have anchored the accords for an afterwards that never happened. And they didn’t wrestle hard enough with developing strong, transparent political institutions. Civil society may not have understood that deeper political reform was needed either. It’s sometimes hard for civil society to recognize the value of institutional democratic politics. And even if they did, their role as a toothless Assembly of Civil Society didn’t give them the power to insist.

During the intervening two decades the promise of peace and democracy has drifted into violence and crime. Plan Colombia and plan Merida forced the worst of organized crime to find a weak link in the region, and Guatemala and Honduras became the prize winners. Elements of that rogue army rose to the occasion and consolidated formidable organized crime syndicates that captured vast swaths of the country, sectors of the economy and the majority of the political class. With few exceptions, civil society was too fearful, scarred and polarized by war to organize and push forcefully for the construction of transparent and representative political institutions whose importance they increasingly came to acknowledge.

Visionary members of the elite, called in the international community to contest the overwhelming power and influence of organized crime. The CICIG did what it could. Its commissioners and their Guatemalan counterparts exceeded expectations by creating enclaves of institutional transparency, capacity and democratic commitment within the judicial system, exposing criminal networks and launching prosecutions of their architects and managers.

Civil society was jolted into action only recently. The exposure of La Linea, and its connections to the presidency, brought them out of the woodwork and onto the streets.  The 2015 protests gave rise to a mass movement that drew diverse sectors of civil society together, traditional popular sectors and a younger cohort of internationally trained businessmen, provided the backup CICIG needed to push its agenda forward. Justicia Ya sadly receded thereafter. It became a movement in search of a cause that could incite renewed activism.

The political situation has evolved dramatically in the past month as the prospect of creating a democratic transition that has eluded Guatemalans for so long finally looms larger and less distant than it has since the signing of peace.

CICIG Commissioner Velasquez is right to characterize the corruption of the political system as the “original sin.” Guatemalan politics are twisted into a tight knot that he and his team have been patiently seeking to unravel. Illicit campaign financing, backed by multimillion quetzal contacts, a corrupt political class, and lack of reforms to the political party and electoral system are tightly tethered. Undoing that knot would free political parties to pursue the representative work a democratic polity requires.

As the knot loosens, battle lines that we have seen elsewhere in the context of democratic transitions are being drawn in Guatemala. Hardliners – chiefly organized crime and their political allies -- are waging what just could be their final offensive. Armed with arguments about interventionism and sovereignty, they are pushing back as mightily as they can to protect their regime and interests. In characteristic hard line fashion, they are willing to alienate the international community, to sow terror among the population and to use repression if that is what it takes to prevent reform.

Justicia Ya is back in action. We are witnessing civil society mobilization that spreads from the interior to the capital and back, as indigenous and mestizo students, peasants, workers, middle classes even joined by some members of the wealthy private sector are putting aside their differing long term political visions to forge common cause. This is the civilian upsurge that galvanizes transitions to democracy. It could be, or could become, Guatemala’s Tahir Square or Gdansk Shipyards protests – the kind of mass civilian mobilization capable of forcing the hand of even the most recalcitrant regime.

The civilian upsurge is key because it pushes those who are on the sidelines to first choose and then show their cards. As of now, we are waiting and watching for potential soft liners to define themselves. To be precise, we are talking about actors and groups who possess insider influence and who can generate factions within the regime that weaken its capacity to repress and resist. For now, the army remains in the barracks, and the police have mostly resisted repression. Will these groups ultimately align with the regime and many of their former comrades? Or will they split into a reformist faction and pressure from within for some kind of orderly change before Guatemala devolves into total political chaos? What about elements of the economic elite -- fence sitters who traditionally supported the status quo and remain fearful of allowing a change that they can’t control? Will they decide that the old order is teetering on its last legs and choose to stand on the democratic side of history?  It’s hard to be sure at this writing. But if a core group of committed softliners coalesces, a process of transition may become that much more feasible.

Finally even though hardline Guatemalans are clamoring for less action by the international community and democratizers for more, the international community is occupying a relatively appropriate space in the context of a possible democratic transition. It is standing a step removed from intervention --closer to the sidelines from where it can cheerlead, offer promises of support, and clearly announce that incentives and sanctions also fill their tool kit.

That being said there may be more that it can and should do from these same sidelines. The US Government in particular must be careful to make sure that a stated policy of nonintervention, is not interpreted as support for either hardliners or a corrupt status quo. To do so, it should reach out to engage with the civilian upsurge emphasizing at each step of the way that civil society are legitimate and key players in transforming a corrupt political status quo into democracy. It can collaborate with partners, international organizations and foundations, who have both a bird’s eye and ground up view of the political landscape and its key players to help break the ice. New partnerships involving civil society coalitions that engage a cast of actors are of the essence. Popular and private sector groups that have historically harbored deep grudges and profound mistrust if not hatred can be encouraged to forge common ground.

This could be Guatemala’s moment – genuine and lasting transitions are made locally. As Carlos Fuentes once famously noted, “democracy is not bananas, it cannot be exported.”  But amidst all the upheaval, uncertainty and fear of what lies ahead, democratic conditions may also be ripe for the picking in Guatemala today. Guatemalans need to lead the way. As they do so, they must count on the full support of an international community that recognizes that the current status quo is dangerous and untenable.