Democracy is not a one size fits all political concept. It comes in different shapes and forms, some more ambitious than others. The current political agenda in Guatemala strives for the most modest version of democracy: a political or procedural kind. It’s still a reach. 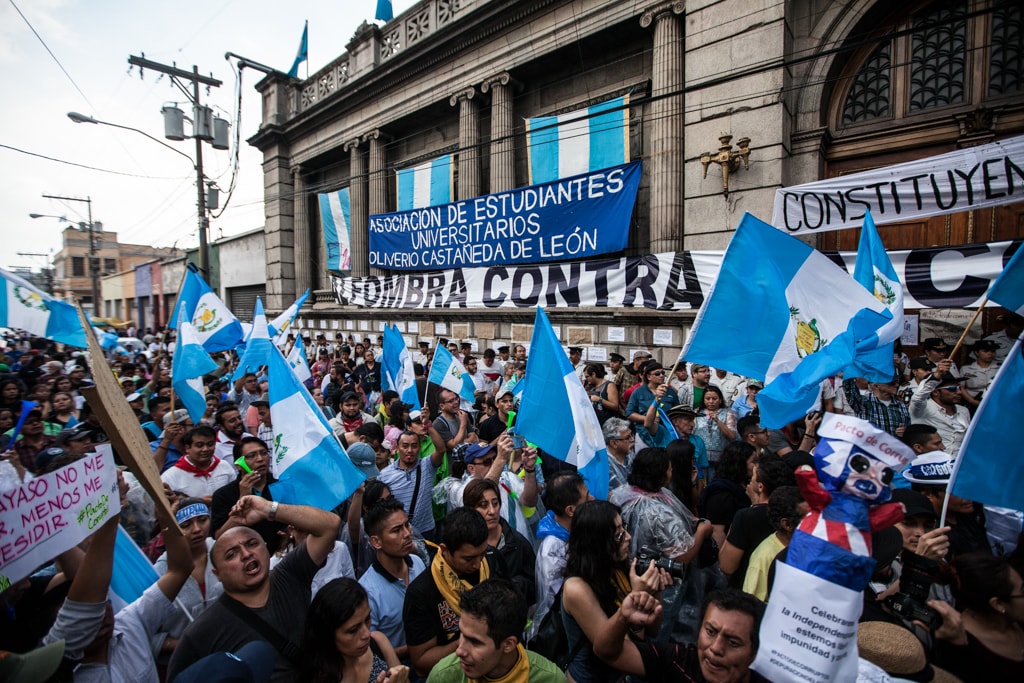 To establish a procedural democracy Guatemalans must somehow manage a feat that has so far eluded their post war political leaders and civil society pressures. They have to create a political system governed by fairer and more transparent rules, procedures and institutions.

I spent several days in Guatemala last week meeting with people from across the political spectrum to gauge their views about the current political crisis and its resolution. CICIG’s decision to point the CICIACS finger at Álvaro Arzú, the towering foe and embodiment of political and economic power was on people’s mind. Pandora’s box had been opened, and everyone was understandably astounded, caught off guard and rattled.

To my surprise however, how Arzú might or might not react did not dominate our discussions. It was more of an ice breaker to each of my conversations. People’s energies were focused elsewhere. Our conversations shifted quickly to discussions about political and electoral reforms. I listened to individuals and groups share their thoughts. They described their ideas about the possibility of reform. They confessed to tense internal debates within their nascent organizations about how to move electoral and political party legislation forward. They reflected on what reforms needed to contain. And they opined about how best to participate in the process, prying open and seizing new political spaces.

I was struck by two contrasting dimensions of what I observed. On the one hand, I realized that democracy was on the move; on the other I felt it was being pushed aside.

On the more positive side, I observed the growth pains of democracy. Citizens, young and older, urban and more rural, are organizing publicly and privately. They are insisting on being heard and taken into account. They are using traditional methods of civic action, staging massive protests and hosting open civil assemblies. Actions like these require guts. It’s hard in a society where powerful actors, in this case the Congress and their criminal allies, are tone deaf and recalcitrantly resistant.  It’s even harder when adversaries thrive on sowing a terror reminiscent of an all too recent armed conflict that remains embedded in the collective memory.

And yet it’s happening. Conversations like the ones I had last week, almost never occurred a decade ago. Five years ago, some stressed the pressing need for electoral and political party reform or recalled the urgency of completing the peace process by finally passing promised constitutional reforms. These conversations also used to take place out of earshot, through encrypted messaging or behind closed doors. And they conveyed a sense of impotence, and pessimism. There was little hope of actually pushing such an agenda forward.

That’s no longer the case. Almost everyone I met conveyed vitality and urgency: they saw this as a moment that was theirs for the taking. They sensed that they had no option but to act. If they don’t push, and push hard, the “bad guys” will win and the politics of corruption and criminality will prevail. They no longer feel the need to talk in hushed voices or in code. We met in cafes, bars and restaurants. We engaged in lively and boisterous debate about the most viable political road forward. It no longer mattered who was listening, we didn’t even glance around us. In fact they spoke loudly and clearly, seizing every occasion to make sure that their voices of change were heard.

They know their fight is just beginning. They need to reconcile internal divisions about how to proceed. They are still figuring out what to ask for, how far to push and when to compromise. Participants in nascent civic movements are engaged in debate about whether and how to become a political party. This is forcing them to confront the most difficult conundrum civil society faces in the context of democratic transitions. Do they move from protest to proposal? Should they? Can they shift from disruptive organizational tactics to formulating constructive ideas that inform political decision making? Is it time to move from the street into the institutionalized corridors of power? What is to be gained? What is to be lost?

I also witnessed the planting of seeds that could generate the inclusiveness that has historically eluded Guatemalan political projects. In the most promising cases, both Justicia Ya and an emerging group of private sector entrepreneurs, La Cantina, conveyed an eagerness to reach out to communities in the interior to formulate and advance a truly national vision of political and economic reform and development. Even more encouraging they aren’t approaching this project with preconceived notions, agendas or answers. They want to listen, learn and partner.

At the same time, I felt a nagging concern that the process of political party and electoral reform is being  entrusted to technocrats. To some extent, this is normal, natural and necessary. The legislative process requires the kind of expertise that the best lawyers and technocrats can provide. But there is also a real risk that discussions become excessively technical, ignoring the five democratic principles that are the core ingredients of procedural democracy. These, outlined and briefly explained below, must guide the work in the weeks ahead.

Political democracy requires a truly free, fair and competitive, electoral process. Discussions about financing and about lowering barriers to entry by new political parties rightly belong under this democratic rubric. Why? Because in a political democracy elections tend to represent the best if not the only opportunity for all citizens to equally express their political voice. When certain actors have more influence than others, electoral outcomes are unfair and tainted. And when voters’ choices are severely circumscribed then elections fail the democratic test.

Representation constitutes the second core ingredient. Discussions about barriers to entry and brainstorming about districting, for example, are integral to ensuring democratic representation. The concept of representative democracy belongs to the modern era. The shift from the direct democracy associated with Ancient Athens, to the contemporary model of representative democracy occurred for a reason. Populations grew too large and individuals became too busy to go to the central square on a regular basis to debate the political issues of the day. As a result, society entrusted the work of government to professional politicians elected by a group of constituents.  But with a catch and a commitment. Politicians were given the rights and responsibilities of governing but with a caveat. They couldn’t do whatever they pleased. They were required to legislate in ways that represented the demands and needs of those who elected them.

Accountability is a third core component of procedural democracy. Democracies need to entrench mechanisms that can hold the hand of elected officials to the fire. Elected officials must understand the political and legal consequences of ignoring their constituents or breaking the law. They must face a genuine prospect of losing re-election or being impeached. Immunity and impunity is antithetical to both representation and accountability.

Political equality represents the fourth principle. This is one of two democratic elements that generate the greatest degree of debate among democratic thinkers. For one group of democrats, often labeled substantive democrats, political equality requires enacting a governing agenda dedicated to diminishing grave social and economic inequalities. Unless this is achieved, substantive democrats contend, then certain individuals will always wield more power over others, thereby distorting the electoral and representative dimensions of democracy.

The political democracy that is on Guatemala’s negotiating table now, asks for less.  It only insists on political equality – that everyone be granted the same fair opportunity to have their voices heard. It is up to the electoral outcomes and ensuing representative political process to decide whether and how to introduce (or not) changes that could level the playing field. For procedural democrats, political equality begets more equality in an incremental fashion.

Assent, or consent, is a fifth feature of political democracy. There must be mechanisms in place for citizens to have a say in the political process. Here too democratic thinkers differ over how much say is necessary. For participatory democrats, citizen input should be regularized and ongoing.

For pure proceduralists, meanwhile, a fair, competitive and transparent electoral process, coupled with representative mechanisms is a sufficient means of guaranteeing citizens a political say.

In the current Guatemalan political climate of popular distrust and utter lack of confidence in the political party system and elected officials, there may be some need to mesh the two forms. Citizens I met with are clamoring for more than a vote. They want a say in devising a system that they can trust and they want to be able to monitor its implementation.

Sixth and finally, procedural democratic governance rests on two entrenched traditions: majority rule combined with respect for minority rights. These are age-old principles that serve the electoral, representative, accountable, and consent-based aims of democracy. Majority rule makes it possible to get things done without trampling on the rights of minorities. Political democracies must find ways to guard against what political philosophers John Stuart Mill and Alexis Tocqueville described as the tyranny of the majority, without falling into an alternative trap of facilitating the tyranny of the minority that James Madison highlights in the Federalist papers.

So where does this leave us today? Guatemalans who expressed their hopes and dreams with me last week had differing ideas of the country they wanted to build and how to go about doing so. Yet they also offered a shared sense of urgency in dismantling the impossibly tainted status quo and replacing it with a functioning political democracy. They are outspoken, they are eager to participate, and they are determined to have a say. They are willing to entrust some of the work to technocrats but not without citizen oversight and not at the expense of enacting a procedural democracy that hues to the core ingredients of procedural democracy. As Guatemalans move tentatively toward reform, it is important to remember that even the most modest version of democracy must be principled and, well, democratic.