No one thought they would get this far. Nor that ousting a president and a vice-president would be the biggest earthquake in Guatemala. The Attorney General’s office (AG) and the UN Commission Against Impunity in Guatemala (CICIG) have now touched the heart of the new government and the economic elite regarding investigations on 1980’s massacres and a ‘first big company’ on tax evasion. And these groups, both retired generals and big corporates, seem to be driving the two-month recently installed president to go up against the AG-CICIG and the US Ambassador. Let’s connect the dots and explain these tensions. 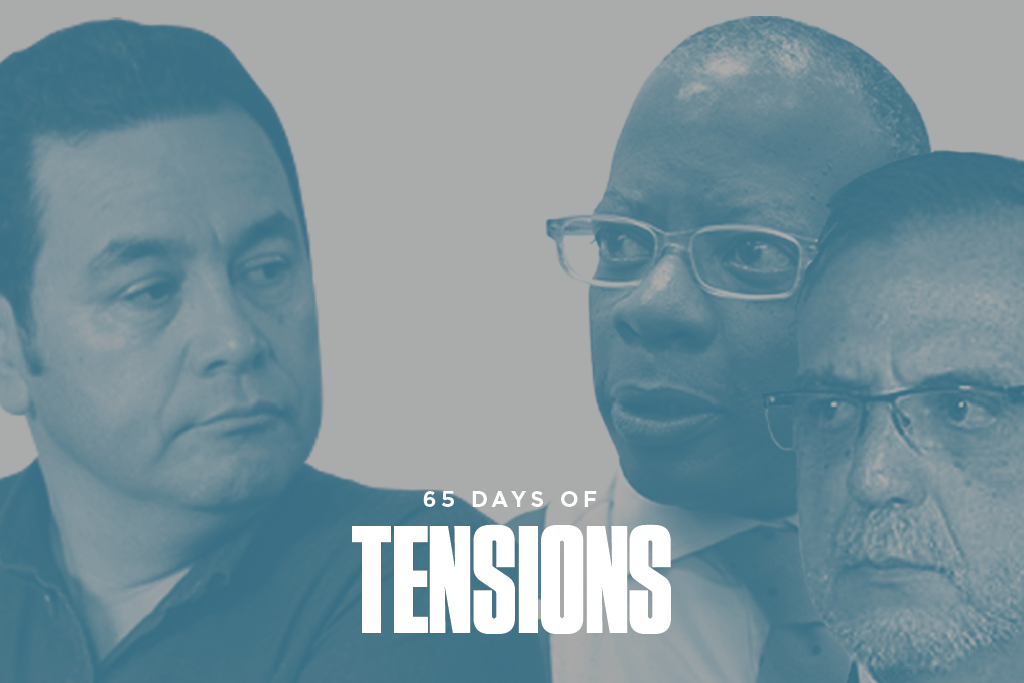 On February 12th 2016, the Guatemalan economic elite’s heart stopped. The AG and CICIG led operations to detain personnel of a company called Aceros de Guatemala (Steels of Guatemala), for bribing officials of the Guatemalan’s Customs Agency (SAT) to avoid paying a US$30 million debt (Q250 million). In 2015, recipients of the bribes, mostly government officials –including the former President Pérez Molina– were sent to prison and prosecuted. Yet in 2016, the name itself of Aceros de Guatemala didn’t ring a bell with many. But, with the economic elite, it most definitely did.

Aceros is the biggest steel company in Central America. His founder, José Luis Gabriel Abularach (94) is a business partner, and since 2007, is one of the Board members of the Banco Industrial (BI), the biggest and most powerful bank in the country.

Different to other more developed economies, Guatemala’s biggest banks are owned by industry corporates, such as agriculture, metal, beer, poultry and sugar empires. They all have seats at the Board of the BI. The group of the eight most powerful family corporations has been described by former presidents and ministers as G-8. 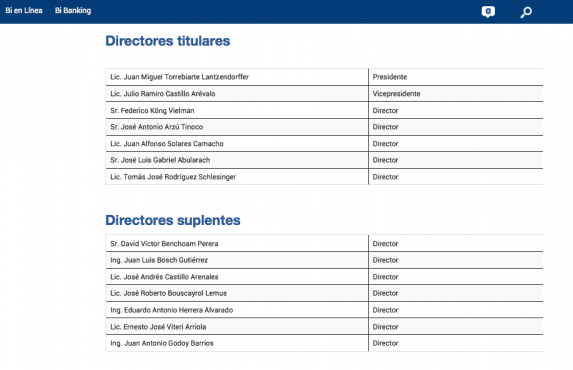 The biggest concern between the country’s strong corporates is that if the justice system extinguishes Gabriel Albularach’s assets, there might be a possibility of the State becoming a BI (minority) shareholder. This possibility is still remote, but realistic.

There are two stands within the economic elite, according to Nómada’s review on various interviews conducted to economic and political actors.

One is that there will be no back-up on Gabriel Albularach if he has committed illicit activities, since a partner should not stain a long-standing bank comprising numerous shareholders.

Another stand holds to maintain old-school modus operandi in the country: convince the President Jimmy Morales to halt the investigations led by AG and CICIG, and to mute the US Ambassador, Todd Robinson, the main supporter and backer of the CICIG.

This is because, in between internal tensions in the Aceros case, on March 1st, the Washington representative gave elPeriódico an interview in which he stated the following: “It is very hard to fight against interests of dark groups who think they can do business under the table, using resources of the State for their [own] interests. I am going to fight this and I don’t care if it is [against] a politician, someone in the private sector or a member of the government”.

For the United States, the fight against corruption is imperative in order for the Guatemalan State and economy to deliver, and stop child migration across their border.

In addition to the nervousness of the Aceros case and Robinson’s statement, another political earthquake in Central America occurred, also triggered by the United States. On October 6th 2015, the US arrested huge businessman Yankel Rosenthal, owner of the Banco Continental (Honduras). He is accused of using his bank for allowing money laundry from narcos.

Since October, many banks in the system fear a US-led judicial action against asset laundering. Banco Industrial is not part of two banks believed to be under investigation.

This ‘verbal interference’ in internal affairs (despite being a fight against corruption in Guatemala by a foreign government), is seen as intolerable by many corporate men, military and conservatives politicians, including President Jimmy Morales. It is considered as an affront against nationalism.

In April 2016, some of these fears came true. A US-backed investigation seized 1% of the shares of Banco de los Trabajadores (although not part of the elite) since they suspected their origin from a US$20 million laundering by Diosdado Cabello, the ‘Number Two’ of the Chavista Regime in Venezuela.*

And what is even more worrisome for the elite is that the first case of the #PanamáPapers spotted one of their banks, Banco Reformador as a means to launder money by a narco kingpin from the Sinaloa cartel in 2009; US$4 million according to her statement in a court in Florida in 2015.*

To the newly instated President Jimmy Morales, only in office for two months and two days, as his first political experience ever, justice is grinding him around the corner.

On January 6th 2016, one week before taking office, the AG led the biggest (numerous) military apprehension in the history of Latin America. Sixteen retired military officials were accused in partaking in the Cobán-Chixoy massacres and in the disappearance in 1987 of a boy called Marco Antonio Molina Theissen.

And what is most, two of Jimmy’s key figures were amongst those captured and accused. On the one hand, César Cabrera was one of his candidates to lead the Ministry of Interior and father of one of his closest advisor; and on the other, congressman Edgar Ovalle, founder of his political party, FCN.

The United States has additionally expressed that another of his main advisors, military official Armando Melgar maintains dark and dubious ties with organized crime.

The lot of Jimmy’s resented military advisors upon the AG and US Embassy is completed by General Ricardo Bustamante. He was the closest advisor of former President Otto Pérez Molina, and he also founded the ‘PhD on Strategic Security’ of the Universidad San Carlos de Guatemala (USAC). The latter represents most of Jimmy’s knowledge and network on politics.

This PhD networking blossomed. Carlos Raúl Morales was any other student and scaled up to Minister of Foreign Affairs during the Pérez Molina administration and was maintained by President Jimmy Morales. Just as the Minister of the Defence.

The diplomatic and political counter-attack

Notwithstanding the CICIG-AG actions and the US instigating the Aceros company and the military, the government cloaks its anger.

On February 24th, his party, FCN, and those corporate-owned (Viva and Creo), tried to block reforms to the AG Law in Congress. The reforms aimed to terminate the presidential right to remove the Attorney General. What is more, they even tried to pass a law forcing the AG to have a warrant to investigate government officials. The opposition in Congress, led mostly by UNE, achieved the reform’s approval to give the AG wider independence.

In March, the government of Jimmy Morales somewhat declared a war against the US Ambassador.

The magazine ContraPoder revealed the statements made by the Apostolic Nuncio (Vatican representative), in which he asked ambassadors of non-interference in national politics. However, his stand goes against the Pope’s actions, where in Mexico, he referred to US election campaign, specifically on Trump’s candidacy, as so racist ‘he wasn’t Christian’.

But it all seems as a national diplomatic manoeuvre. President Morales endorsed the Nuncio by stating: ‘I will specially appreciate if you stick to the spirit of the Vienna Convention regarding diplomatic relations, in the sense of not meddling in our country’s internal affairs. Through your actions, it is necessary you keep supporting the construction of the State of Guatemala, and to the union of all sectors that make of it’.

Nevertheless, this was just the tip of the iceberg. Nómada had access to the letter Carlos Raúl Morales sent to all ambassadors de day before the meeting with the Nuncio, on March 10th. The following will summarize the letter, thought to be directly intended against the US Ambassador (for his statement in elPeriódico) and the United Nations Representative, Valerie Julliand (active diplomat against impunity and inequality).

Jimmy Morales’ Foreign Affairs Minister wrote: ‘The fight against corruption is the government’s cornerstone. This duty is accompanied by the support of international cooperation. But by no means authorizes diplomatic agents, whether country or international organizations, to improperly claim the right to intervene on internal affairs of the country, this includes abstaining in disputing and commenting on government issues to the media’.

But it’s not over yet. There is a threat.

‘That concern was jointly shared by some representatives expressed on one-on-one dialogue, and also on February 12th at the Foreign Affairs Under-Ministers presentation. The Foreign Affairs Minister made the adequate warning to avoid taking additional and necessary actions under applicable international norms’.

In diplomatic jargon, these actions imply requesting the White House or the United Nations, to withdraw their accredited ambassadors in the country.

Here, the letter sent by the Minister of Foreign Affairs to all ambassadors in the country.

The threats are real. In April 2016, the Government asked the UN to withdraw its representatives (and then denied to the press). And, feeling the tensions, the US Ambassador publicly stated that ‘sovereignty is the issue that matters to him less after corruption and child mortality caused by insufficient public health services’.*

In addition, Nómada published that Congressman Ovalle’s visa had been revoked by the US. He is one of the heads of the party of President Jimmy Morales. This could be related to human rights abuse, corruption or drug trafficking.*

This rhetoric led by Jimmy’s government (and also by columnists close to corporate elite) against the US, United Nations and CICIG, resembles and brings back memories of the stand Otto Pérez Molina’s government took during 2012-2015.

But beyond this midst of war between extremely powerful actors, 2016 has been a watershed for the history of the Republic of Guatemala.

The possibility of an investigation to be carried out on fiscal fraud [tax evasion] pulled by a partner at Banco Industrial changes all the rules of the game. This bank is described to have been born in the ‘cradle of the Chamber of Industry of Guatemala’, founded in 1968 by hundreds of industry men, ‘with a capital of Q25 million, raised by 10% tax exemptions gracefully given to Guatemala’s industry.

Now, conspiring for not paying taxes, just as one of the board members of the powerful BI did, is considered an equal act of corruption and impunity in the same way as public embezzlement.

In Guatemala, this is only the beginning.

* This article was translated by Bibi La Luz González and published in English on April 14, 2016.