A Nómada investigation into the origin of the case in the Guatemalan Immigration Office led to a document that could give Jimmy Morales’ Interior Minister a hard time. 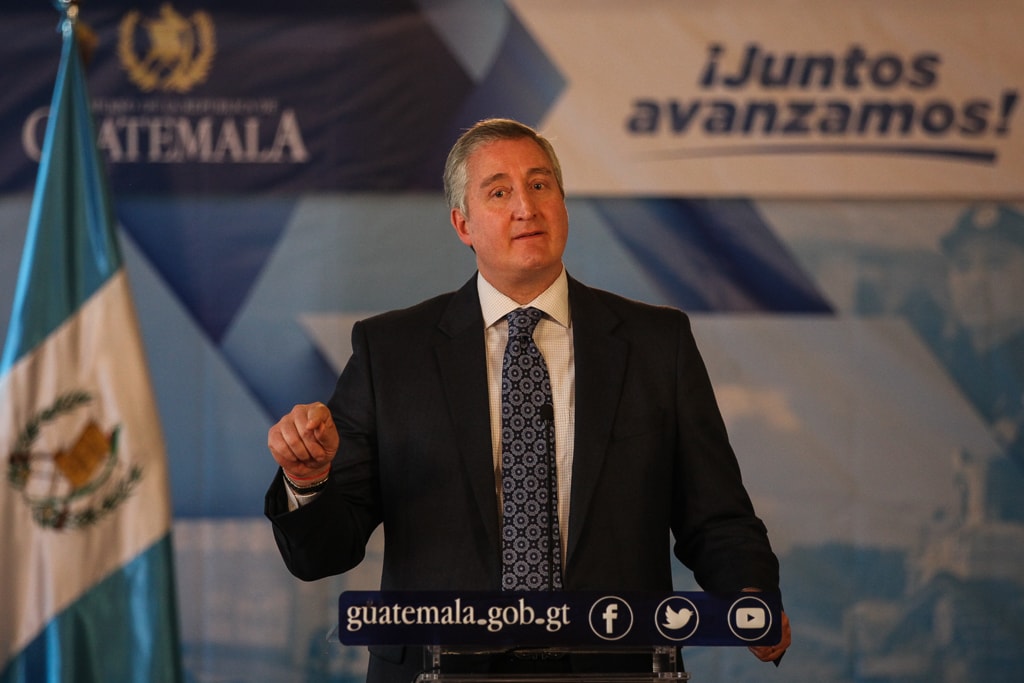 The alliance among the corrupt in Guatemala is starting to get recognized around the world for its propaganda and defamation campaigns. The most recent made-up, false story goes like this: Iván Velásquez, Commissioner of the CICIG [International Commission against Impunity in Guatemala], and Thelma Aldana, Head of the Public Ministry, are part of a conspiracy of President Vladimir Putin to carryout political revenge against a Russian family, the Bitkovs, arrested for buying passports in Guatemala. But the real case is more complex. It arose from a complaint filed by a unionist about a network involved in the sale of passports operating in the Guatemalan Immigration Office. The unionist was murdered. Nómada found an official document in which the unionist blamed those around the then-director of the Immigration Office and current minister of Interior, Enrique Degenhart, for his possible murder. Below are the two versions of the story, one of conspiracy and the other a journalistic investigation.

The Conspiracy: A columnist and her version of the Russians’ story

It all started with an opinion column published on March 25th in the conservative newspaper The Wall Street Journal under the title: Kremlin Revenge in Guatemala. Mary Anastasia O’Grady, the author, accused the CICIG and the Public Ministry of having turned into an arm of the Russian government to take revenge on the Bitkov family, presumed political dissidents.

The version of the story that O’Grady presents argues that Igor Bitkov, his wife Irina Bitkova and his daughter Anastasia escaped Russia in 2008 because the state bank, BTV Bank, pressured them not only because of a debt default, but also because they refused to sell the shares of their business, Nort-West Timber Company.

They arrived in Guatemala in 2009, allegedly responding to an online advertisement that offered to take care of immigration procedures in Guatemala. According to O’Grady, when the Russian financial system sued the family, the CICIG and the Public Ministry offered to prosecute them and were able to arrest them in 2015 and convict them this year, 2018.

In her same article, she overlooks the fact that the representative of the Russian bank BTV was Henry Comte, designated by president Jimmy Morales as a substitute justice of the Constitutional Court. She also overlooks that the lawsuit of the Russian bank was dismissed and that the CICIG and the Public Ministry continued with the investigation into the network involved in the sale of fraudulent passports.

Mary Anastasia O’Grady is a columnist and member of the editorial board of The Wall Street Journal. She is known for being a pen of the right and for publishing conspiracies. In 2002, for example, she raised the alarm about intelligence information from the George W. Bush administration that accused the Fodel Castro regime of developing biological weapons to sell to the Iranian and Iraqi governments. At the same time, officials of the Bush administration created the idea that there  weapons of mass destruction in Iraq.

Both ended up being lies.

O’Grady has been to Guatemala. She received an honorary doctorate degree at the libertarian University Francisco Marroquín.

O’Grady’s accusation, this time against the CICIG, needed someone to give them echo and lend them more credibility.

That’s when two key figures appeared. The American businessman, Bill Browder, who had hired lawyer and accountant, Sergei Magnitsky to investigate a corruption case involving Putin’s government. In retaliation, Magnitsky was murdered. Browder invested high sums of money to lobby for the Magnitsky law, a tool that honors his memory and is now key against corrupt individuals and human rights violators around the world. Browder tweeted out the publication that same day.

Absolutely appalling story of how Kremlin tracked down one of its enemies, Igor Bitkov, in Guatemala and got the Guatemalan gov’t and a UN ‘anti corruption’ organization to sentence him, his wife and daughter to 19 years (& 14 yrs) for passport violations https://t.co/8GtdIxTld8

A day later, Senator Marco Rubio, the ex-presidential candidate from Florida appeared. He posted a tweet in which he said that he supported “the idea” of the CICIG, but that he was worried about it being manipulated by Vladimir Putin.

I support the idea behind #Cicig but new signs here of how it is being manipulated & used by radical elements on the left & even #Putin. Read this piece: Kremlin Revenge in #Guatemala https://t.co/XoGA4tbtGQ

That’s how O’Grady’s conspiracy started to echo among political actors in the United States Senate.

This is a conspiracy that has little logic and that also ignores the gruesome origin of the case.

It doesn’t hold up because the case did not begin in 2013 as O’Grady argues in response to the lawsuit of the Russian bank VTB. It started three years earlier, in 2010, due to a complaint about a ring that supplied fraudulent passports made by Fidel Pachecho, a member of the Immigration Office’s union.

Furthermore, what O’Grady says about the Bitkov family, that it was the only one convicted, is not true. The Bitkovs were convicted on January 5, 2018 with sentences between 14 and 19 years of prison for identity theft and use of falsified documentation. But 36 other people were also convicted. And Colombian citizens, Marcela Ortega Bejarano, Luis Valencia Luque, and Jonh Alex Carmoma Salgado were also convicted, in 2010 and 2013 respectively.

That Russia has influence over the CICIG also makes little sense.

The CICIG does not receive one cent of financing from Russia, a country famous for promoting structures that encourage impunity and murders, just like their old spies in London. CICIG’s $18 million annual budget comes from the United States, Sweden and the European Union: three sources of financing that have been considered by Russia as “its enemies” in the world.

It is not the first time that the version of the Bitkov case presented by O’Grady, has been heard in Guatemala. Since his arrest in 2015, Igor Bitkov used to publish this version of the story in his blog igorbitkov.com that he ran from the Mariscal Zavala prison, which houses most of the politicians and businessmen prosecuted by the CICIG, among them Gustavo Alejos and Otto Pérez Molina.

“Ms. O’Grady neglects the important role that the prosecutor general of Guatemala and the CICIG have played in combating corruption. The American Bar Association has observed remarkable progress by the CICIG in combating deep-rooted corruption and promoting a just rule of law. To address this one case in isolation, omitting the contribution of CICIG in seeking to dismantle the complex criminal structures that have co-opted the Guatemalan government, plays into the hands of those who are threatened by its accountability efforts and seek to discredit them by any means.”

The journalistic version: The story of the union member who reported the network involved in the sale of passports and the circle surrounding Degenhart before his murder

The origin of the investigation initiated by the Public Ministry and the CICIG against the Bitkovs traces back to 2010, when Fidel Pacheco, Secretary General of the unions of the Immigration Office, accused a group of officials from the Office of being behind the  illegal entry of people into Guatemala, the CICIG noted in a statement.

Fidel Pacheco’s accusation pointed out that 66 officials within the Immigration Office were part of a corruption network that charged up to USD$5,000 for bribes and falsification of documents and passports. Charges that even Fidel Pacheco was arrested for and accused of in 1992 and 2005. Between 2010 and 2012, the comptroller of the Immigration Office was Enrique Degenhart Asturia, the current Minister of Interior of President Jimmy Morales; position that he obtained at the recommendation of Mayor Alvaro Arzu, for him he worked as advisor at the municipal government in Guatemala City

But the case is even worse.

Fidel Pacheco feared that he would be assassinated for his denunciations. This is why on May 8, 2018 he turned to the Office of the Human Rights Ombudsman (PDH), at that time headed by Sergio Morales, who filed his complaint (EXP ORD GUA 32452010).

In the complaint to the PDH, Fidel Pacheco denounced Degenhart’s network for threatening his life.

“The complainant makes known that he is a victim of death threats being made by employees of the General Directorate of the Immigration Office  within the Ministry of the Interior (he does not recall full names), who are his enemies and close to the current comptroller. He has received information that they are planning to kidnap and kill him but will first start with his loved ones because officials of the General Directorate of the Immigration Office have knowledge that he has provided information that could affect the current administration ... On Friday 04/23/2010 he was chased by a black vehicle, with tinted windows, Toyota brand ".

Three months after he made the denunciation, on August 6, 2010, the union leader, Juan Fidel Pacheco Coc, was tied up by his feet and hands and assassinated in his home in zone 6, in Guatemala City.  The door was not forced open, which suggests it is possible that he knew his torturers and assassins.

In 2011, Degenhart did not wish to respond to the newspaper, La Hora when he was asked about the assassination of Fidel Pacheco and about his relationship with Gustavo Alejos, the then all-powerful private secretary of former President Alvaro Colom, who brought him to the Immigration Office as comptroller.  He also did not respond to La Hora about the assistance that the institution he directed gave to Roberto Barreda, the primary suspect in the disappearance and murder of Cristina Siekavizza, so that he would flee the country.

Degenhart arrived at the Ministry of the Interior in January of 2018, coming from the municipal government of Guatemala City to replace Francisco Rivas, an ally of the fight against corruption. In the three months he’s held the position, Degenhart has dedicated himself to upending the efforts of the Public Ministry and the CICIG, firing technical teams in the Ministry of the Interior and in the National Civilian Police, going so far as to withdraw police assigned to the CICIG for their safety and to carryout arrests of individuals accused in corruption cases.

Now, Degenhart should be questioned by the PDH and the Public Ministry with regards to another case: the one of the unionist who filed a complaint before the MP about corruption within the Immigration Office and who left a note with the Human Rights Ombudsman (PDH) in which he blames Degenhart’s circle if he was assassinated.

Igor and Irina Bitkov's North West Timber Co. / Vilda Consult LLC scheme was called "Scam of the Year" by journalists investigating the fraud a decade ago (before they fled to Guatemala).

From at least 2005 through the scheme's collapse and wake, media outlets, for years, exposed the activities of Igor and Irina Bitkov's NWTC and related entities – revealing the enterprise as a giant "Ponzi" / pyramid-type loans+-scheme.

Con-man Bill Browder is an international criminal - involved in scams since, at least, the 1990s. His Magnitsky hoax is debunked by many documents and a mountain of evidence on the public record. Details @ https://jaccuse.news

Igor and Irina Bitkov's North West Timber Co. / Vilda Consult LLC scheme was called "Scam of the Year" by journalists investigating the fraud a decade ago (before they fled to Guatemala).

From at least 2005 through the scheme's collapse and wake, media outlets, for years, exposed the activities of Igor and Irina Bitkov's NWTC and related entities – revealing the enterprise as a giant "Ponzi" / pyramid-type loans+-scheme.

Con-man Bill Browder is an international criminal - involved in scams since, at least, the 1990s. His Magnitsky hoax is debunked by many documents and a mountain of evidence on the public record. Details @ https://jaccuse.news/page1.html