The US is wrong in Honduras (and maybe Guatemala)

If Ukraine and Belarus, with their mafias, sex trafficking, and dictatorships, show how bad it can be to be Russia’s neighbor, Central America shows how dangerous it can be to be the United States’ neighbor. And when Washington acts without listening to us, things always, always turn out worse. 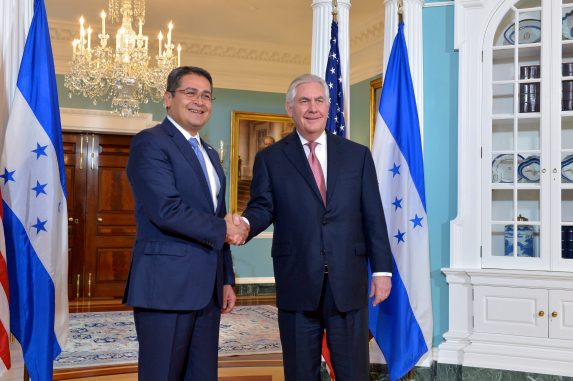 President Juan Orlando Hernández of Honduras, and US Secretary of State Rex Tillerson.

This article was translated by Richard Brown / EntreMundos

Before we start, here’s a thought: If we as individuals are the sum of our contradictions, families are, social groups are, and nations are, too. In Washington, organizations, consultants, members of Congress, diplomats, bureaucrats, business people and citizens coexist and face off. Some really do work to support Central America, and others work only “to maintain stability in the region.” And sometimes, a single person can work to support the region and at the same time to “stabilize” it.

Two indispensable pieces of contemporary criticism help to understand the US and its paranoias.

One is a Netflix documentary called 13th. It details the criminalization of the country’s black citizens since “the end of slavery” came along with the 13th Amendment to the US Constitution, which abolished slavery “except as a punishment for crime.” The documentary explains that the US sees its black citizens as potential criminals by nature, and so confronts them with “law and order” policies. This is why the US incarcerates so many of them. (The US has 5% of the world’s population and 25% of the world’s incarcerated population.)

The other is an article in The Atlantic magazine titled “Donald Trump is the First White President,” in which Ta-Nahesi Coates explains that the main reason that white Americans voted for Trump was none other than racial anxiety triggered by the first black president, Barack Obama.

If US WASPs have trouble relating to their fellow citizens of other ethnicities or cultures (blacks, Jews, Catholics, Latinos), imagine how much trouble they have relating to former colonies in Latin America.

And to say “colonies” is not “anti-imperialist propaganda”; it’s simply accurate. In 1823, US President James Monroe told European leaders, “…we should consider any attempt on [the part of European powers] to extend their system to any portion of this hemisphere as dangerous to our peace and safety… as the manifestation of an unfriendly disposition toward the United States.” His message was clear: America is for Americans and we won’t tolerate European intervention in North or South America.

Since then, inheriting Europe’s colonial vision, the US has considered us, its Latin American neighbors, ungovernable: damned for being Catholic, for speaking Spanish and Portuguese, for being mestizo, indigenous, black, tropical.

And so we require an “iron first” to be governed, so we can be “stable” and more profitable for US companies.

1902 was the first time the US twisted the arm of the Guatemalan dictator Estrada Cabrera, the “powerful” Señor Presidente, so that he would grant 99 years of fiscal and legal privileges to United Fruit (UFCO), handing over railroad and mail service monopoly contracts. In 1905, the banana magnate Sam Zemurray forced a coup d’etat in Honduras to obtain these same privileges for 99 years. In 1930, UFCO bought Zemurray’s banana operations in Honduras. And for nearly the entirety of the 20th century, the US supported dictatorships to “stabilize” ungovernable Latin Americans, and especially Central Americans.

Read the series about UFCO and the Revolution, by Stephen Kinzer, translated by Rodrigo Fuentes.

In 1978 the US began to develop mixed feelings about the abuses of the militaries they were backing and began (thankfully) to contradict themselves with human rights doctrine. And since then there has been a conflict in Washington regarding its relationship with Central America, between those who defend human rights and those who defend authoritarianism. Sometimes, this contradiction can be lived by a single person. In other words, a bureaucrat can support human rights but also authoritarianism.

By 2000, Colombia, Central America, and Mexico were already synonymous in Washington with the problem of drug trafficking and crime. And the only way to combat this problem was with militaries and the DEA, sacrificing human rights to “contain criminals.” Did this reduce by even a gram the tons of cocaine entering the US? No. Did it provoke enormous violence in Mesoamerica? Yes.

Thankfully for Guatemala, human rights organizations have good friends in Washington. And they help us explain that our main problem isn’t drug trafficking, but impunity. And if we combat impunity, we also combat drug traffickers. And the corrupt. And governments will be able to serve democracy and the people after freeing themselves from their capture by the powerful. And this is why the US provides 38% of the CICIG’s $18 million annual budget.

Yet the US still finds this difficult, despite the successes of the CICIG, despite its popular support, despite the fact that it’s an experiment that can be replicated all over the world. It’s been 200 years of the Monroe doctrine, and 115 years of treating us as ungovernable, as requiring an iron fist.

And no, my friends from Washington, the Guatemalan government doesn’t have room for everybody. We will either eject the criminals from government, or the criminals will eject decent citizens, which is what they’re doing. An example? Where are Lucrecia Hernández Mack and her team, or Quique Godoy and his team? They’re out. And where are all General Bustamante’s intelligence agents? In the army, in the Interior Ministry, in the Strategic Intelligence Service, in the Chancellor’s Office, in the Presidency. They’re everywhere in the government. So if you in the US won’t help, you should get out of the way.

Because it doesn’t suit Washington for all of Central America to end up like Honduras. In Honduras they have maintained their vision of “law and order” without the counterweight of a real CICIG equivalent. (The MACCIH doesn’t count because it’s only an advisory body, thanks to the sleight of hand of Juan Orlando Hernández – JOH – the president attempting to stay in power.)

Honduras is where Washington most recently executed its policy of “the priority is to fight criminals, without worrying about democracy.” This is how they justified the 2009 coup, how they justify their preferred politicians’ ties to criminals, and why they don’t want to stop justifying the election fraud of 2017.

Since 2009, after the coup that exiled a president in his pajamas, Honduras became the world’s number one landing zone for cocaine air shipments, which come mostly from Venezuela. It’s the country where the law is nonexistent and citizens’ rights have no protections. Where they kill the environmentalist Berta Cáceres, they prove a vice president’s ties to the murder, and nobody presses charges against her.

Does the Guatemalan business elite know, does CACIF know, that rigging that election will only mean shooting themselves in the foot, hurting their own businesses and damaging their own Central American “stability”?

Salvador Nasralla, the opposition candidate in Honduras, is a disgrace. A disgrace. Manuel Zelaya, his main ally, is equally bad or worse. But even considering all this, Nasralla the disgraceful is better than Juan Orlando Hernández the mafia boss. Especially because it was clear that Nasralla was winning the election until an “electoral system error” happened and JOH gained the lead.

When the US State Department congratulates the Honduran Supreme Electoral Tribunal for restoring order, or does not demand that it recount the vote, it is ruining another decade for Honduras. Just as how US validation of the 2009 coup led the country to become a narco-state, a criminal state against any democratic opposition, in 2017 the US is about to condemn Honduras to another decade of violence and underdevelopment.

Washington has to stop seeing Central America as a land of potential criminals who can only be governed with authoritarianism.

It has to stop believing that criminals can foster rule of law better than the CICIG and other similar organizations. That the DEA knows better than the citizens who are demanding democracy.

Instead of supporting the Guatemalan and Honduran and Salvadoran and Nicaraguan criminals who “bring stability” to their governments, you know how you could help us?

By going after the criminals of Central America and those who support them. And the best way to do this? Take away their visas, freeze their bank accounts, make them pariahs. In the US you have your Magnitsky Act. It wouldn’t cost you a thing. And you’ll see how you help those of us who do want to improve the neighborhood.

If you do this, we promise you that from Central America we will tell the world that it is better to be Washington’s neighbor than Moscow’s.