Why Does Guatemala's President Want to Expel Head of Anti-Graft Body? 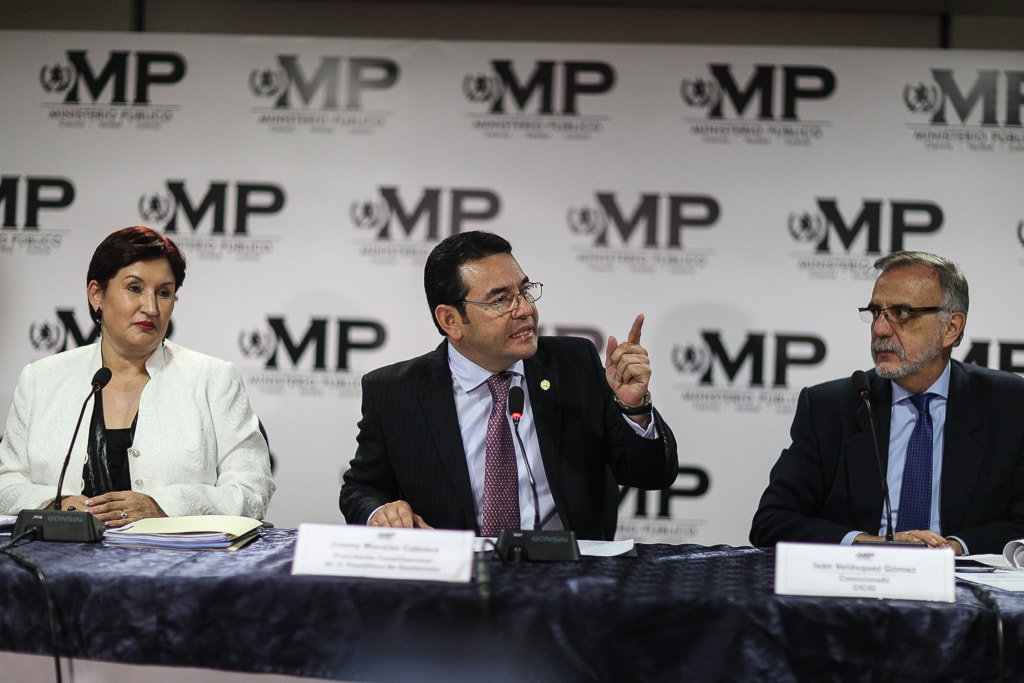 Guatemala President Jimmy Morales at a press conference in June 2016.

A battle seems to be brewing over the future of Guatemala's United Nations backed anti-corruption body, the International Commission against Impunity in Guatemala (Comisión Internacional contra la Impunidad en Guatemala – CICIG). Guatemalan news outlet Nómada reports the country's president is heading to New York where he plans to ask for the ouster of the head of the anti-graft commission, as investigators are reportedly beginning to dig into shady spots in the president's campaign finance record.

Guatemala Attorney General Thelma Aldana has threatened to resign if President Jimmy Morales calls on United Nations Secretary General Antonio Gutérres to remove Iván Velásquez as head of the CICIG. But what would lead the weakest president in democratic history to such political suicide? Nómada spoke to four high-level sources to find out.

The four sources are at the ministerial level, in the Attorney General's Office (Ministerio Público - MP) and in the diplomatic corps. Faced with the delicate situation of an apparent political crisis in the making, they agreed to speak under the condition of anonymity.

*This article originally appeared in Nómada and has been translated, edited for clarity, and reprinted with permission. Its views do not necessarily reflect those of InSight Crime. See Spanish original here.

With excellent connections in Washington, the president of the media outlet elPeriódico José Rubén Zamora was the first to warn of the crisis on social media. And even though nobody in the presidency officially responded, sources confirmed that the "secret" meeting President Jimmy Morales had asked for with the UN secretary general, Iván Velásquez's only boss, was to seek a change in command in the CICIG.

This time, the president's preoccupation wasn't about the case against his son and brother for defrauding the country's National Property Registry (Registro General de la Propiedad - RGP). Nor was it to defend his closest circle of advisors being investigated by the MP. It's something much more serious.

Two of the sources confirmed that Morales had discovered that the CICIG and the MP have spent weeks investigating his campaign financing activities from the second round of the 2015 election, and that those investigations could potentially target the president.

With the revelation in June 2016 of the "cooptation of the state" case against the administration of former President Otto Pérez Molina and Roxana Baldetti, the CICIG and the MP unraveled a network of sophisticated structures of channels, banks, mines, gas stations, telephone companies and construction companies used to illegally fund candidates and then collect favors in state contracts.

And now, Nómada's sources confirm, the MP and CICIG are investigating the finances of then-presidential candidate Jimmy Morales and his party. Three of the sources say they were related to the cooptation case and other corruption probes.

(This tweet from Nómada reads, "Confirmed: Thelma Aldana threatens to resign if Jimmy Morales asks for the retirement of Iván Velásquez as head of CICIG.")

"The president is very nervous and thought that expelling Iván Velásquez would be the easiest option to save himself," another source added.

The political moment recalls the months between December 2014 and April 2015, when then-President Otto Pérez Molina hesitated to support the CICIG, which came closer to the presidential office with each investigation, eventually leading to his resignation and arrest.

In the last months of 2014, the CICIG had reached Pérez Molina's inner circle. The body accused former congressional president Gudy Rivera, now serving a 13-year sentence, of manipulating justice. And it came to light that the late Byron Lima had taken control of prisons during the administration of then-Interior Minister Mauricio López Bonilla, who today stands accused in a corruption case and whose extradition the United States has requested on drug trafficking charges.

On April 14, 2015, two days before the CICIG and MP exposed the customs fraud case dubbed La Línea, Pérez Molina made this statement on radio when he refused to renew the mandate of the CICIG, already headed by Iván Velásquez.

"Some want to pressure me into saying that the president is afraid to follow CICIG because they will investigate him. The CICIG does not come here to investigate presidents," Pérez Molina said.

Ten days later he renewed the CICIG's mandate. And four and a half months after that statement, Thelma Aldana ordered his arrest.

Another source closed the interview for this report with this reflection:

"The dilemma of the president and some of the businessmen who illegally financed [Morales'] campaign is that they do not know if anyone has already told the authorities the method they used to circumvent the law. Given this uncertainty, until yesterday, [Morales] had chosen to try to expel Iván Velásquez. We will have to see what happens in the coming days, weeks and months," one of the sources added.

*This article originally appeared in Nómada and has been translated, edited for clarity, and reprinted with permission. Its views do not necessarily reflect those of InSight Crime. See Spanish original here.